The Pharaoh and the little black ants. 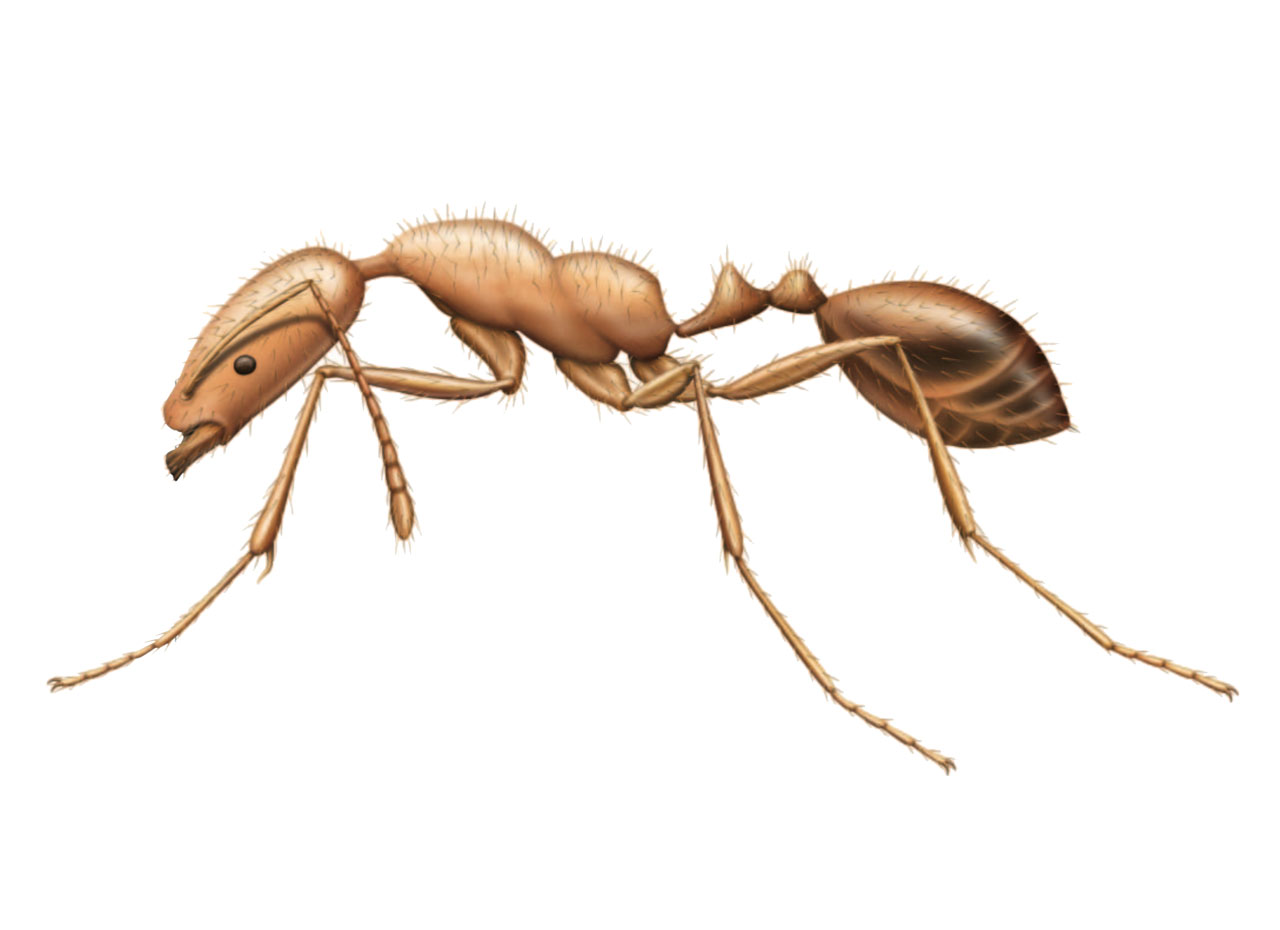 The pharaoh ant (Monomorium pharaonis), so named out of a belief that it may have been one of the insect plagues of Ancient Egypt, is a major indoor nuisance pest. The pharaoh ant and the little black ant are small ants with workers ranging in size from 1.2 to 2.0 mm. They vary in colour from yellow-red (pharaoh ants) to black (little black ants), and have 3-segmented antennal clubs. The Pharaoh ant has been introduced to virtually every area of the world including Europe, the Americas, Australasia and Southeast Asia. Pharaoh ants are a tropical species but they thrive in buildings anywhere, even in temperate regions provided central heating is present.

These ant species nest in soil or buildings, and are common in households where they feed on a variety of domestic food, especially fats. They are also known to be predaceous on a wide variety of insects. Damage is caused by chewing insulation of electrical cables and cutting holes in fabrics and rubber goods during nest building. They also inflict a painful sting.

The Pharaoh ant is polygynous, meaning its colonies contain many queens (up to 200). An individual colony normally contains 1,000–2,500 workers but a high density of nests gives the impression of massive colonies. Colonies also lack nestmate recognition so there is no hostility between neighbouring colonies, which is known as unicoloniality. They produce sexually reproductive individuals roughly twice a year in established colonies but in the laboratory colonies can be manipulated to produce sexuals at any time of year. Colonies proliferate by “budding” (also called “satelliting” or “fractionating”), where a subset of the colony including queens, workers and brood (eggs, larvae and pupae) leave the main colony for an alternative nest site. Budding is a major factor underlying the invasiveness of Pharaoh ants. A single seed colony can populate a large office block, almost to the exclusion of all other insect pests, in less than six months. Elimination and control are made difficult because multiple colonies can also consolidate into smaller colonies and “weather the storm” of a baiting programme only to repopulate when baiting is withdrawn. Pharaoh ants are a major hazard in hospitals, where their small size means they can access wounds, driplines, and instrumentation, causing the spread of infection and electrical interference.
Pharaoh ants have become a serious pest in hospitals, rest homes, apartment dwellings, hotels, grocery stores, food establishments and other buildings. They feed on a wide variety of foods including jellies, honey, shortening, peanut butter, corn syrup, fruit juices, baked goods, soft drinks, grease, dead insects, toothpaste and even shoe polish. They can also gnaw holes in silk, rayon and rubber goods.

Pharaoh workers are about 1/16-inch long, or 2.0 millimeters in length. They are light yellow to reddish brown in color with a darker abdomen (hind portion of body). There is a stinger. The petiole (narrow waist between the thorax and abdomen) has two nodes and the thorax has no spines. Eyes are poor and possess on average 32 ommatidia. The antennal segments end in a distinct club with three progressively longer segments.

The pharaoh ant queen can lay hundreds of eggs in her lifetime. Most lay 10 to 12 eggs per batch in the early days of egg production and only four to seven eggs per batch later. At 27 °C (80 °F) and 80 percent relative humidity, eggs hatch in five to seven days. The larval period is 18 to 19 days, prepupal period three days and pupal period nine days. About four more days are required to produce sexual female and male forms. From egg to maturity takes about 38 to 45 days depending on temperature and relative humidity. They breed continuously throughout the year in heated buildings and mating occurs in the nest. Mature colonies contain several queens, winged males, workers, eggs, larvae, prepupae and pupae.

Pharaoh ants use pheromones as the primary means of communication. Part of the colony migrates to a new location. Nests can be very small, located between sheets of paper, in clothing or laundry, furniture, foods, etc. Nests usually occur in wall voids, under floors, behind baseboards, in trash containers, under stones, in cement or stone wall voids, in linens, light fixtures, etc. They prefer dark, warm areas near hot water pipes and heating tapes, in bathrooms, kitchens, intensive care units, operating rooms, etc. They are “trail-making” ants and often are found foraging in drains, toilets, washbasins, bedpans and other unsanitary sites as well as in sealed packs of sterile dressing, intravenous drip systems, on surgical wounds, food and medical equipment.

Our preferred extermination technique for an infestation of Pharaoh Ants

We would inspect and determine if Bait or Spray is more appropriate in the given situation.

Typically, if the ants inside the property are interested in foods, we would deploy suitable baits. Pharaoh Ants will find this bait during their foraging activities. Pharaoh Ants will not only feed on this bait but also carry it back to the nest to feed the Pharaoh Ants that are devoted to maintaining the colony. Some Pharaoh Ants may have multiple feeding on the deployed bait as the bait’s lethal characteristics do not become evident immediately upon ingestion.

We greatly value your input.